The crew travels to the central planet Ariel -- it's all shiny and clean, and very high tech. Inara sets off to do her yearly physical, and Simon hires the crew to pull a heist. (We'd best start calling him a criminal mastermind, 'cause his plan? It's good.) 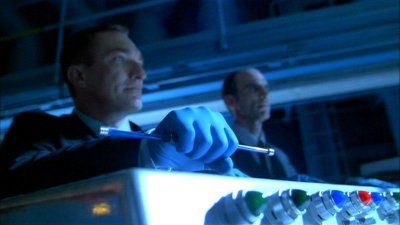 They're to break into the hospital and steal some pricey drugs while Simon puts River through a Three D Neuro Imager to see what the Alliance did to her gray matter. Problem one: Simon and River need to be kind of dead to get into the hospital without the security system throwing up a flag. Problem two: leaving Jayne in charge of anything pretty much guarantees that somethin's gonna go south.

As usual, things get complicated.

WASH: Can I use companion as a verb?

SIMON: Could you not do that while we're... ever?

RIVER: He looks better in red.

MAL: The patients were cynical and not responding and we couldn't bring them back.

JAYNE: If I had wanted schooling, I'd'a gone to school.

SIMON: For this to work, River and I will have to be dead.
JAYNE: Huh. I'm starting to like this plan.

MAL: Look, you got a little stabbed the other day. That's bound to make anyone a mite ornery.

JAYNE: Maybe I'll give him a tattoo while he's out.

RIVER: Your toes are in the sand.

ZOE: Can we fly somewhere with a beach?
WASH: Maybe a naked beach?
ZOE: Ooh.

JAYNE: You stop flapping that pretty mouth at me.

MAL: Just once I'd like things to go according to the gorram plan.

JAYNE: Make something up. Don't tell 'em what I did.

Retrieved from http://www.fireflywiki.org/Firefly/ArielEpisode
Page last modified on June 09, 2010, at 08:45 AM MST