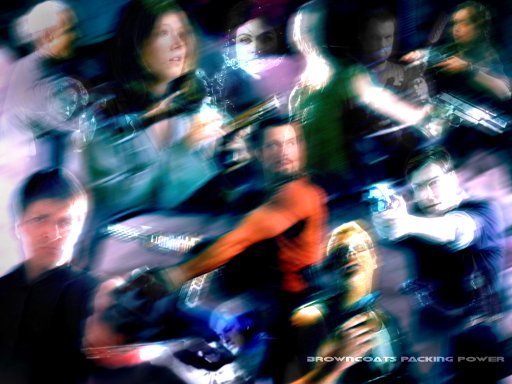 A list of various weapons seen in the show and some thoughts on firearms of the Firefly 'verse in general.

In the 26th century, firearms seem to look exactly like the ones we have now. Mostly. One thing that has changed is the use of caseless ammunition on many of the 'mid-range' weapons -- there are still standard 'cartridge' weapons with the expected number of shots, but many weapons seem to use caseless ammo, which means no brass flying out of the side of the gun, a chemical propulsion system -- which is why it sounds funny when many of the guns are cocked or fired, and increased ammo capacity and rate of fire on guns that you wouldn't expect it from (Wash, for example, fires what looks like a revolver on what can only be described as "burst" mode during the scene on Serenity in Heart Of Gold).

Jayne's favorite pistol (he's even shown cleaning it at the table) looks to be a Le Mat revolver (from 1860) with a barrel shroud. He carries it all the time, but is only shown shooting it in the "Out of Gas" flashback. Lawrence Dobson used a 1921 Astra 400, or Astra 600 (depending on caliber) in "Serenity." Mal's revolver (which has been confirmed as molded aroung a five-shot .38 caliber Taurus model 85 revolver) is a (likely modified) officers' sidearm from the Unification War, almost certainly the same one he packed in the Battle of Serenity Valley. Notice whenever Mal cocks the hammer of his gun, there's the sound, but the hammer never comes back. Even in close-up, you can see the thumb piece is stationary. Inara's pistol is a Ruger. In the 1950's and later, a factory compensator was available, on the Mark I, for target shooters. Zoe's Mare's Leg might be a '92 Winchester, or a '94 (the '92 was in pistol cartriges (.25/20 to .44/40) and the '94 is in rifle cartridges and pistol cartridges. Pistol cartridges are the only way to get 6 rounds in that button magazine). The sheriff in "The Train Job" carries an old Remington Rolling Block rifle. They've been making those since 1867.

A Theory to Try and Explain This

There is speculation that the seemingly archaic gun designs that exist within the Firefly universe come from a similarly archaic gun law. The theory goes that there was a gun law devised to reduce the number of guns available to the public. From the initiation of the law, no new guns were to be sold--however a provision was made that allowed "pre-ban" weapons to be exempt from the controls in place. This law has presumably been in effect for many hundreds of years by now, grandfathered into law by the Alliance and its territories. Nowadays guns that would be nothing but antiques and curiousities are the only things everyday folks are allowed to arm themselves with. There's doubtless a lot of couterfeit antique guns, some with actual faked serial numbers and the like to pass cursory checks, which is why so many of these "antique" guns exist (and why the cost for one isn't astronomical!). Likewise it's possible that the same legislation that allows pre-ban guns to be sold likewise covers guns remanufactured using old pre-ban parts--which would go a long way to explain the firearms that have obvious similarities to weapons from bygone eras, but with a more modern sci-fi look. Obviously the Alliance government has no such restrictions, which is why their weapons are so dramatically more futuristic. This is just a theory, no canon here, but it does seem to fit the facts nicely; certainly better than the unsavory idea that people are terraforming planets and traveling in spaceships but Berettas and civil war revolvers are somehow state of the art...