When Inara asks the crew to help a friend (and erstwhile Companion) with a business problem, Mal immediately agrees. Jayne doesn't take much convincing once he learns the occupation of those in need, and Shepherd Book thinks he might be able to spread the good word. 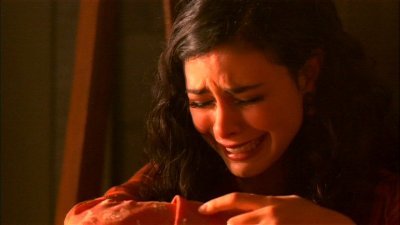 Planetside, our heroes attempt to surmount loneliness, temptation (er, some of 'em do - there's a bit of plowing as well), jealousy, baby talk, childbirth, a hijacking, and ruttin' illegal lasers. It's just another day in the life...

Along with The Message, this episode was nominated for a Hugo award for Best Dramatic Presentation (Short Form) in 2004.

INARA: Every well-bred petty crook knows: the small concealable weapons always go to the far left of the place setting.

INARA: I suppose you heard most of that?
MAL: Only 'cause I was eavesdropping.

KAYLEE: Look, they got boy whores! Isn't that thoughtful?

KAYLEE: Wash, tell me I'm pretty...
WASH: Were I unwed, I would take you in a manly fashion. \\ KAYLEE: 'Cause I'm pretty?
WASH: 'Cause you're pretty.

MAL: Then so will I. Inara, think you could stoop to being on my arm?
INARA: Will you wash it first?

Referring to Petaleen's womb, which she is intently staring at.
RIVER: Who do you think is in there...?

"engage in a feces hurling contest with a monkey" (Inara, about what the companion house could go and do.)
"Blessing on you, dear sister." (Nandi, addressing Inara.)
little sister {in script without English} (Nandi, addressing Inara.)
"Little by little, the tribes used the Earth up. Barren, she had little left to offer them. / Swollen of her, they left." {just part of this} (Puppet Theater Narrator, about leaving Earth That Was, as Mal and Inara enter theater.)
"Understand?" (Jayne {off-screen}, to prostitutes about proper shooting and punishment.)
"Extraordinarily impatient Buddha" (Nandi, to Mal about waiting to kiss.)
"dirty bastard sons-of--" (Nandi, referring to Rance's man who just shot her male prostitute.)
"p-ss-soaked pikers" (Wash, on trapping Rance's men on Serenity.)
"Weak-ass sauce!" (Mal, referring to his fancy drink.)

Retrieved from http://www.fireflywiki.org/Firefly/HeartOfGold
Page last modified on June 09, 2010, at 08:46 AM MST