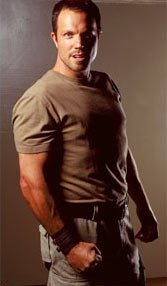 A mercenary who didn't fight for either side in the Unification War, Jayne works for whoever pays him the best. At the moment, that's Mal, so that's where Jayne's loyalty lies — until something better comes along.

Jayne stores his guns just above his bed — appropriate since his favorite posession is a gun he calls Vera (Our Mrs Reynolds). He's a tough fighter who can take a bullet or two without much complaint, and an expert marksman. For all the talent Jayne has for combat, he's lacking in social graces, which frustates Malcolm Reynolds on more than one occasion.

But there's more to Jayne than meets the eye; he also shows a human side:

He is almost always touching or smelling something. This becomes more pronounced as the series conitinues and is quite pronounced in Serenity.