Serenity lands at the town of Canton on Higgins' Moon, a settlement dedicated to making mud. The crew's bound to pick up some merchandise for a buyer but the local magistrate and his prods are suspicious types who are more than likely to cut off your hands and feet than let strangers walk about, unless you're looking to do legitimate business. Also, Jayne's twitchy because the last time he was here, he wasn't exactly doing legitimate business. In fact, the magistrate is out for his thieving blood. 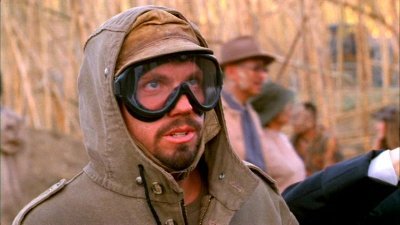 One with his own theme song.

They've got to retrieve the merchandise, keep their hands and arms attached to their bodies at all times, and figure out how to work Jayne's newfound fame to their advantage.

WASH (watching Simon play his role... poorly): Who is this diabolical master of disguise?

SIMON: This must be what going mad feels like.

MAL: Jayne?
JAYNE: Yeah?
MAL: You wanna tell me how come there's a statue of you here, lookin' at me like I owe him somethin'?
JAYNE: Wishin' I could, Cap'n.

JAYNE: Instead of us hanging around playing art critic till I get pinched by the Man, how's about we move away from this eerie-ass piece of work and get on with our increasingly eerie-ass day?

WASH: We gotta go to the crappy town where I'm a hero!

MUDDERS [cheering]: To Jayne!
JAYNE: To me!

SIMON: I reattached a girl's leg. Her whole leg. She named her hamster after me. I got a hamster. He drops a box of money, he gets a town.

RIVER: They say the snow on the roof was too heavy. They say the ceiling will cave in. His brains are in terrible danger.

RIVER: TOO MUCH HAIR!

JAYNE: You think there's someone just going to drop money on you?! Money they could use?! Well there ain't people like that... There's just people like me.

MAL: It's my estimation that every man ever got a statue made of him was one kind of sumbitch or another.

"What is this garbage!?" (Wash, referring to Mudder's Milk.)
"Hay-soose (Jesus)-mother-of-jumped-up--" (Jayne, as Hero of Canton song starts.)
"panda urine" (Bartender, about Mudder's Milk being unworthy of the Hero.)
"Shut up." (Zoe, shocked at hearing from Wash that Jayne's a folk hero.)
"(a real) jerk!" (Jayne {off-screen}, Jaynestown, referring to Boss {Magistrate} Higgins.)
"Motherless goats of all motherless goats." (Wash, as notices land-lock.)

Retrieved from http://www.fireflywiki.org/Firefly/Jaynestown
Page last modified on June 09, 2010, at 08:46 AM MST