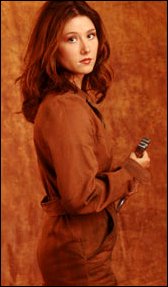 Cheerful, energetic Kaylee (full name, Kaywinnit Lee Frye) is Serenity's ace mechanic, a tomboy who accepts anything the universe throws at her with a smile and a bounce. Trained by her father, she's a natural mechanic, which got her the job on the Firefly Transport ship Serenity(after "going out" with the previous mechanic) despite her total lack of experience with either that model of ship or a Trace Compression Block engine. At the same time, she can be flummoxed by particularly difficult problems ("Sometimes, a thing gets broke, it can't *be* fixed.") or by someone who sets out to break a machine instead of fix it, which seems a fundamentally foreign concept to her. (As when Saffron sabotages Serenity... twice.)

The crew's occasional forays into crime don't bother her, though she's not much good in a gunfight. Kaylee is a 'glass is half full' kinda gal. No matter what is going on around her, she's usually able to see the positive side of the situation. When describing the more questionable behavior among her fellow crewmates, she makes even the most illegal behavior sound adorable.

Whereas other science fiction shows involve an engineer for the ship who often talks in complicated technobabble, Kaylee tends to describe her activity in the engine room in very simple, organic terms: there's still a sort of complicated code-like semantics to her wording at times, but it's more like listening to people talk about 20th century cars or a sick friend than futuristic machinery. 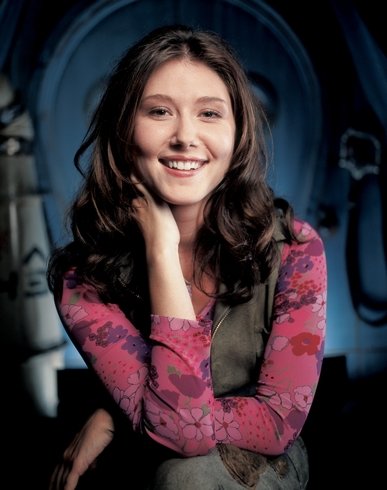 Kaylee has her own quarters on ship (decorated with Christmas lights and the like; her name is painted on the doorway with flowers), but she also has a hammock set up in the engine room (probably because her room is located as far from the engine room as physically possible -- Doyce) and often can be found there working or communing with Serenity, which she treats like another member of the crew.

Kaylee had at least a minor role in the decor of the dining area. Amidst the yellows and browns are flowers painted on the walls in the same style that Kaylee painted on her door.

Retrieved from http://www.fireflywiki.org/Firefly/Kaylee
Page last modified on March 09, 2007, at 02:38 AM MST