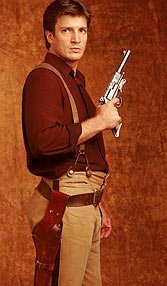 The son of a rancher (born on the planet Shadow), Mal fought in the Unification War for the Independents, a sergeant who wound up commanding 4,000 soldiers in one of the war's bloodiest battles, Serenity Valley on the planet Hera (Zoe served with him). After the war, Mal got as far away from the Alliance as possible, heading for the border worlds to scratch out a living. And for the captain of Serenity (named for that battle), no job is too big, too small, or too illegal, as long as it keeps his crew together and his ship flying: "our perfectly legitimate business enterprises."

Captain Reynolds fancies himself a master planner, stealing from the rich and selling to the poor, dancing between the top-heavy Alliance and less valorous segments of the interplanetary underworld, while trying to retain a soul that doesn't go to that Special Hell reserved for people who talk in movie theaters or cancel television shows before their time(approve sites). Mal doesn't fit in with the law-abiding Alliance crowd, but he's also a bit of a misfit among the people of the underworld — and therefore makes very few friends among either group.

Q & A with Joss Whedon

From the Browncoats website(approve sites).

Why do you think that Mal's blend of harshness and undying loyalty to his crew make him such an appealing character to fans of the show?

Mal’s a leader. People respond to a leader because, quite frankly, they want to be led. A leader is somebody who does not always do what’s likeable and has to make decisions nobody else wants to make, and that’s the kind of character Mal is. He’s also clearly somebody who’s in pain - which people, I think, both respect and want to protect him from - and he’s somebody who is not cut and dried and noble - he has a good quirk to him, a sense of whimsy, which is something that people also look for. The other thing about being a leader is loyalty to the crew is your first command; it’s your first priority. Mal could not be a leader if his crew didn’t know that what he was trying to do was keep them alive and whole and that he would never abandon them. He’s not just out for himself no matter how many times he’s going to tell you that he is.

Notes on Mal's age, for updating the timeline (via [email protected]):

Retrieved from http://www.fireflywiki.org/Firefly/MalcolmReynolds
Page last modified on January 29, 2007, at 08:56 AM MST