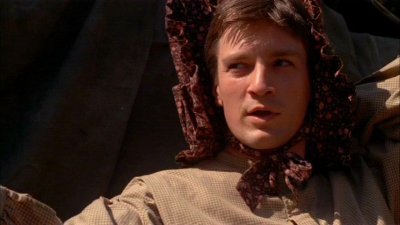 Mal, Jayne and Zoe shoot up some local thugs for some nice settlement people, and everyone hangs around afterward to drink wine and dance. Only, the captain imbibes a little more than he should, and they end up with an extra passenger on Serenity when they take off: the new Mrs. Reynolds -- a young, innocent lamb by the name of Saffron.

JAYNE: I married me a powerful ugly creature.
MAL: How can you say that? How can you shame me in front of new people?

MAL: You been bird-doggin' this township awhile now... folks 'round here wouldn't mind a corpse of you.

MAL: I swear by my pretty flowered bonnet, I will end you.

MAL: And don't you ever stand for that sort of thing. Someone ever tries to kill you, you try to kill 'em right back!

BOOK: If you take sexual advantage of her, you're going to burn in a very special level of hell. A level they reserve for child molesters and people who talk at the theater.

ZOE: Remember that sex we were planning to have, ever again?

JAYNE: It is my very favorite gun.

MAL: She has a name.
JAYNE: So does this. I call it Vera.

MAL: Well my days of not taking you seriously are certainly coming to a middle.

MAL: It's been a while -- a long damn while -- since anybody but me took ahold of my plow.

WASH: Oh do I wish I was somebody else right now. Somebody not... married, not... madly in love with a beautiful woman who can kill me with her pinkie!

INARA: You stupid son of a... collapses

JAYNE: That's why I never kiss 'em on the mouth.
Everyone pauses uncomfortably.

MAL: But she was naked! And all... articulate!

WASH: Okay! Everybody not talking about sex, in here. Everyone else, out.

JAYNE: See, Vera? Dress yourself up, you get taken out somewhere fun.

SAFFRON: You gonna kill me?
MAL: Can you conjure up a terribly compelling reason for me not to?

"Of course." (Simon, about whether or not he has an encyclopedia.)
"You don't deserve her, you fink." (Kaylee, to Mal about his treatment of new wife.)
"Mind your own business." (Mal, to Kaylee about his treatment of new wife.)
"bao" or stuffed bun (specific type of food) (Wash, on seeing Saffron's cooking.)
"The explosive diarrhea of an elephant!" {in script as English} (Mal, response to Jayne's Vera-for-Saffron offer.)
"bastard" (Mal, referring to Elder Gommen, for paying his bill with a wife.)
"Holy mother of God and all her wacky nephews" (Wash, response to Saffron's advances.)
"Merciful buddha..." {in script as English} (Inara, on seeing that Mal's alive.)
"cheap floozy" (Zoe, referring to Saffron.)
"brilliant" (Wash, referring to Saffron's sabotage rewiring.)
"Hold on a second." (Wash, to Mal as checks if Saffron signaled anyone.)
"Damn!" (Wash, as notices electrical interference.)
little sister {in script without English} (Simon, addressing River.)

Retrieved from http://www.fireflywiki.org/Firefly/OurMrsReynolds
Page last modified on June 09, 2010, at 08:47 AM MST