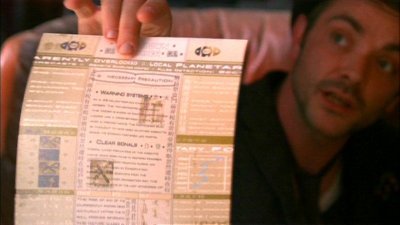 The above is a paper thin computer moniter, CPU, and touch screen all worked into one sheet of paper. This sort of miniature computer is seen throughout the 'verse.

The fact that currency is still valuable in the purchase of simple synthetic goods and fuel show us that the science is far from perfect, maybe even reached some kind of limits. When molecular nanotechnology reaches a certain point, most goods will be easily replicable and thus cheap or free. Far fewer goods and services will be of limited supply in the universe (certain informatation, real estate, sheer mass of some elements, Companionship), and thus worth money.

Interestingly, in Bushwhacked, the official who interviewed the crew when onboard the Alliance Cruiser used a pad of paper. We can presume that each leaf was a separate computer, it seems odd that this would be necessary.

They could all be screens of one computer, in the binding.

If you are looking for an excellent sci-fi work on nanotech and post-scarcity economies, i would reccomend 'diamond age' by Neil Stephenson. in this case however, we ought to consider how functional a piece of paper is rather than how much data we can cram onto it. nanotech computing allows every piece of paper to be a full fledged cpu with a range of logics and i/o, it's not so much what a piece of paper _can_ do but what it is used for.

paper-based workflows are simply better and more efficent, using a pad of paper is handy and that's why he uses it.

NOTE: Take a look at the November 2005 issue of Wired magazine. It features an article on Leap Frog inventor Jim Marggraff's new "pentop computer," the FLY. The FLY is a talking, computerized pen that gives the user audio feedback as they write and draw on special "fly paper." For example, you can you draw a calculator, then use it by touching the pen to the handwritten digits and functions, then hear the answer announced. The piece of paper becomes your keyboard, mouse and screen. It's a great article and a fascinating development.

Something like this could reasonably be developed to where specially printed paper isn't necessary - thus, giving an alternate explanation for why the official was using a pad of paper in Bushwhacked.

Retrieved from http://www.fireflywiki.org/Firefly/PaperScreens
Page last modified on September 30, 2006, at 09:42 AM MST