There's so much you can say about the character of the ship... 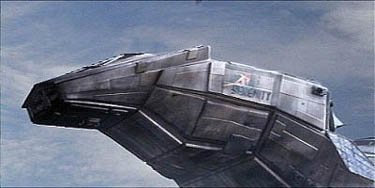 More than I've got time to say all in one sitting, so let's just get the particulars out of the way with a few useful images and facts.

Serenity is a Midbulk Transport, standard radion-accelerator core. Class code 03-K64 -- Firefly. A Firefly Transport. She is one of the 'Aught-Three Series' (presumably, given her slightly worn appearance, that '03' refers either to the year when the model was first presented or the third revision of the basic design). There have been other models of Firefly prior to the '03 -- for instance, the Firefly Model One. It is durable and apparently has lots of locations where illegal material may be hidden, a fact that makes it an ideal ship for Mal and his crew of sometimes smugglers.

The high concentration of little nooks and crannies in Serenity which do so well by the crew for concealing paralegal cargo also serve other, considerably smaller, masters. These secondary "masters" are tiny insects that apparently dwell in the less accessible spaces in Serenity. These bugs were briefly revealed to exist in the episode “Objects in Space” as the camera descends through the floor of the kitchen during the crew’s meeting to reveal River listening from the cargo bay walkways.

Serenity has, in many ways, been made into a home for the crew and passengers (though most of that work has been done by Kaylee, as shown by the entrance to her bunk [1]). Still, much of the ship is fairly utilitarian, composed of wire grating over most of the floor and exposed ductwork [2].