Ahh, the Pilot Episode that Got Played Last by Fox... 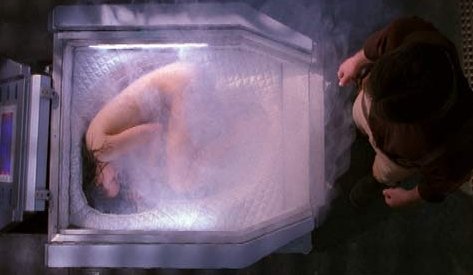 Wherein we meet Malcolm Reynolds and Zoe in Serenity Valley, discover how Simon Tam, River Tam, and Shepherd Book joined the crew, deal with a rogue lawman, a tricksy old lady who'd sooner shoot Mal than deal straight, cargo that don't wanna get delivered, and a persistent pack of hungry Reavers. The introduction to the 'verse.

Nominated for a Hugo Award in 2003 for Best Dramatic Presentation (Short Form); lost to the Buffy episode "Conversations with Dead People".

MAL: Ready?
ZOE: Always.
MAL: We're not gonna die. We can't die, Bendis. You know why? Because we are so very pretty. We are just too pretty for God to let us die. Huh? Look at that chiseled jaw.

WASH: I'd say worth a little risk.
JAYNE: Yeah, that was some pretty risky sittin' you did there.

WASH: I can always say I was flying the ship by accident.

JAYNE: Captain, can you stop her from bein' cheerful, please?
MAL: I don't believe there is a power in the 'verse that can stop Kaylee from being cheerful. Sometimes you just wanna duct tape her mouth and dump her in the hold for a month.

ZOE: I know something ain't right.
WASH: Sweetie, we're crooks. If everything were right, we'd be in jail.

WASH: Just a couple of days lying around, you with the bathing. Me with the watching you bathe.

MAL: And I'd like to be king of all Londinum and wear a shiny hat.

MAL: Well, maybe I'm not a fancy gentleman like you with your... very fine hat.

JAYNE: I don't understand why we didn't leave that sumbitch in a pool of his own blood.
MAL: We'd be dead. Can't get paid if you're dead.

JAYNE: Ten percent of nothing is -- let me do the math here -- nothing into nothing, carry the --

MAL: We got protein in all the colors of the rainbow.

MAL: Jayne, your mouth is talking. You might wanna look to that.

MAL: Been a long time since Patience shot me and that was due to a perfectly legitimate conflict of interest. I got no grudge.

JAYNE: Little Kaylee here just wishes you was a gynecologist.

BOOK: brought you some supper, but if you'd prefer a lecture, I've a few very catchy ones prepped. Sin and hellfire... one has lepers.

MAL: This is not my best day ever.

MAL: This is over, you and me are gonna have a personal chat.
SIMON: Won't that be fun.

SIMON: I need to check her vitals.
MAL: Oh, is that what they call it?

WASH: Can we maybe vote on the whole murdering people issue?

MAL: Now you only gotta scare him.
JAYNE: Pain is scary.

JAYNE: Was gonna get me an ear, too.

ZOE: If they take the ship, they'll rape us to death, eat our flesh and sew our skins into their clothing and if we're very very lucky, they'll do it in that order.

INARA: I gave the boy a free thrust, since he's not long for this world.

MAL: Well, we may not have parted on the best of terms. I realize certain words were exchanged. Also, certain... bullets.

MAL: I believe that woman's planning to shoot me again.

JAYNE: Here's a little concept I been workin' on. Why don't we shoot her first?
WASH: It is her turn.

ZOE: Nice place for an ambush.

ZOE: She still has the advantage over us.
MAL: Everyone always does. That's what makes us special.

MAL: Well, you were right about this being a bad idea.
ZOE: Thanks for sayin', sir.

WASH: If everybody could just be quiet a moment...

WASH: I don't mean to alarm anybody... but I think... we're being followed.

ZOE: Sir? I'd like you to take the helm, please. I need this man to tear all my clothes off.
WASH: Work, work, work...

RIVER: I didn't think you'd come for me.
SIMON: Well, you're a dummy.

MAL: How come you didn't turn on me, Jayne?
JAYNE: Money wasn't good enough.
MAL: What happens when it is?
JAYNE: Well... that'll be an interesting day.

MAL: What? The doctor! Oh. Hey! Is there, is there a reward?

"Your Mother!" or "His Mother!" (Mal, on learning of approaching Alliance ship.)
"Shut up." or "Shut your Mouth" (Mal, over comms, to Zoe & Jayne as they fret about Alliance ship.)
"Affirmative." "Yes"(Kaylee, to Wash about going to black.)
"Oh No, it's spoilt!", could also be "oh no, we're ruined" (Wash, as Alliance ship scans them.)
"Shut up." (Mal, to Wash as he banters with Jayne in cargo bay.)
"Watch your back." or "Be careful"(Wash, to Zoe as she & the others go off to meet Badger.)
"Come in." (Inara, to Book knocking on shuttle door.)
"Yo Mama! Everyone under the sky should die" (Mal, on learning there's a mole on board.)
"little sister" (Inara, addressing wounded Kaylee.)
"Everybody shut the hell up!" (Mal, as everyone argues about killing the Fed.)
"nuts" (Wash, meaning crazy, about flying without core containment.) #I honestly can't figure this one out
"little sister" (Mal, addressing Kaylee.)
Jerk! also "Bad Egg"(Jayne, referring to Patience's man.)
"We're finished." (Zoe, as Reaver ship approaches.)
"I'm sorry?" (Simon, response to Book's comment about Serenity's name not being a joke.)

"Cry baby cry, make your mother sigh" is an actual song lyric from the Beatles.

This episode was broken in two parts for showing on the Sci-Fi Channel. The last scene before the split is when Mal first sees River and looks up and merely says "Huh".

Retrieved from http://www.fireflywiki.org/Firefly/SerenityPilot
Page last modified on June 09, 2010, at 10:48 AM MST