Serenity lands on Persephone -- not quite a core world, but not one of the poor colonies, either. We meet one of Inara’s regular clients (Atherton Wing). We are lead to believe he is rather possessive. Badger (an old business acquaintence from the episode "Serenity") has a new smuggling job for Mal, but Mal has to make contact with the client first (fellah doesn't think much of Badger... go figure). Mal and Kaylee go to a ball to make contact with a rich local named Warrick... the same ball Inara and Atherton are attending. Mal gets into a scuffle with Atherton and in this locale, by law, Mal and Atherton have to duel with swords. 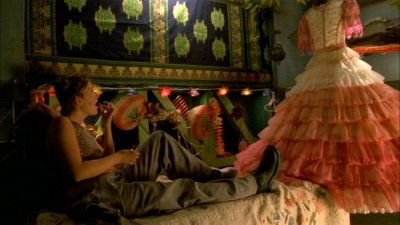 It all becomes about honor... or... well, proving a point... or something. Definitely not about running away.

Shindig: the Gone With the Wind of Firefly episodes; Persephone has that sort of look and feel about it.

INARA (regarding the game of pool): As with other situations, the key seems to be giving Jayne a heavy stick and standing back.

MAL (on making planetfall on Persephone): Resupply, look for work, move along. We sniff the air, we don't kiss the dirt.
ZOE: Wasn't planning on the dirt-kissin', sir.
WASH: I wouldn't stand for it anyway, Cap'n, jealous man like me.

ZOE: Planet's coming up a mite fast.
WASH: That's just cause I'm going down too quick. (panicky voice, trying to be jovial) Likely crash and kill us all.
MAL: Well, that happens, let me know.

BADGER: You think you're better than other people.
MAL: Just the ones I'm better than.

BADGER: 'Course you couldn't buy an invite with a diamond the size of a testicle, but I got my hands on a couple.
JAYNE AND MAL: (chuckling)
BADGER: ...Of invites!

MAL: He's supposed to be old, kinda stocky, wears a red sash crossways.
KAYLEE: Why does he do that?
MAL: Maybe he won the Miss Persephone Pageant.

KAYLEE: Is that him?
MAL: That's the buffet table.
KAYLEE: Well... how do we know unless we... question it?

KAYLEE: Up until the punching, it was a real nice party.

MAL: I never back down from a fight.
INARA: Yes, you do! You do all the time!

RIVER: Sure, I got a secret. More than one. Don't seem likely I'd tell 'em to you now, do it? Anyone off Dyton Colony knows better than to talk to strangers. You're talking loud enough for the both of us though, ain'tcha? I've known a dozen like you. Skipped off home early, running graft jobs here and there. Spent some time in the lockdown, but less than you claim. And you're what? Petty thief with delusions of standing? Sad little king of a sad little hill.

(Inara blocks Mal's sword attack and smacks him on his... pants.)
INARA: How did I avoid that?
MAL: By being fast like a freak?

MAL: Sure, it's humiliating. Having to lie there while the better man refuses to spill your blood. Mercy is the mark of a great man. (Stabs Atherton in the side.) Guess I'm just a good man. (Stabs him again.) Well, I'm all right.

MAL: See how I'm not punching him? I think I've grown.

INARA: It wasn't entirely a disaster.
MAL: I got stabbed! Right here!

"Hey!" (*A.* Wright the slaver, reaction to pool-ball failure. *B.* Wright the slaver, reaction to Mal's pickpocketing.)
"sweetheart" (Atherton Wing, addressing Inara on the Cortex.)
"Kick me in the bottom." (Mal, meaning butt, after he upsets Kaylee about dress.)
"smelled a fart" (Badger, referring to what Sir Warrick acts like he's never done.)
"bottom" (Badger, meaning butt, and the sticks up Mal's & Sir Harrow's.)
"You're looking wonderful, old friend." (Inara, to elderly man at ball.)
"dog crap" (*A.* Atherton Wing {×3}, referring to Serenity *B.* Inara, on seeing Mal at the ball.)
"Thank you" (Kaylee, to Mal's permission to interrogate the buffet table.)
"What?" (Kaylee, response to Banning Miller's comment at the ball.)
"No way." (Kaylee, refuting the 80-04's quality.)
"stupid" (Mal, referring to duel.)