Although this isn't the last episode chronologically, The Message was the last Firefly episode made on set -- watch that last scene in the snow and you'll see the last scene that the cast was together. That alone makes it worth watching, but of course there's more good stuff going on than just OOC historical info. 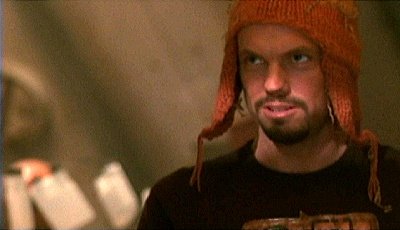 An old war comrade of Mal's and Zoė's named Tracey smuggles himself onboard Serenity cunningly disguised as a dead man. Turns out he's smuggling valuable enhanced organs inside him. Other folks want those organs back. This leads to a heap of trouble.

Like Ariel and Objects In Space, The Message is a thriller more than anything else. In this case, it has a Das Boot feel. We get to experience being trapped with scary noises all over the place.

Along with Heart of Gold, this episode was nominated for a Hugo award for Best Dramatic Presentation (Short Form) in 2004.

Wash: Oh my God, it's grotesque! Oh, and there's something in a jar.

Wash: Do not fear me! Ours is a peaceful race, and we must live in harmony.

River: My food is problematic.

Mal: He calls back, you keep him occupied.
Wash: What do I do, shadow puppets?

"Why don't you tell the cow about its beautiful eyes?" (Kaylee, at Simon's poorly delivered compliment.)

"Name of all that's sacred" (Mal, invoked to Tracey about his innards.)

crap {in script without English} (Womack, referring to Tracey.)

Retrieved from http://www.fireflywiki.org/Firefly/TheMessage
Page last modified on June 09, 2010, at 08:53 AM MST