A battle for control of the craft threatens to erupt after Mal and Zoe become entangled in a botched mission to steal medicine from a moving train. 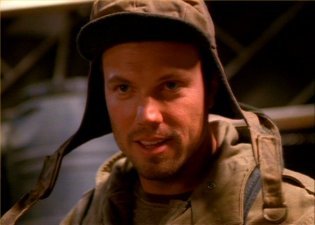 The episode opens in a dark, musky bar on Unification Day - the day celebrating the final victory of the Alliance, giving them control of all the settled worlds. Zoe and Mal are playing a game while Jayne watches. Of course there is a loud mouth who has to badmouth those who fought in the war against the Alliance (such as Mal and Zoe), and the inevitable fight ensues. The bar brawl ends up outside with Wash bringing Serenity over for a last minute rescue along the edge of a cliff.

Looking for work, Mal, Zoe and Jayne meet a man named Adelai Niska with his resident henchman Crow. Niska has a job for them - a train job stealing the cargo from a passenger train. As it's supposedly Alliance goods, Mal has no problem, but when he finds out the 'goods' are actually medicine needed for Paradiso residents who are suffering from Bowdens Malady, Mal must decide whether he wants to get paid and possibly be responsible for the death of miners and their families or return the cargo and face the wrath of Niska.

THUG: I'm thinkin' you're one a' them Independents.
MAL: And I'm thinkin' you weren't burdened with an overabundance of schooling, so why don't we just ignore each other 'til we go away?

WASH: Every man there go inside or we will blow a new crater in this tiny moon.

MAL: See, this is another sign of your tragic space dementia, all paranoid and crotchety.

MAL: Well, they tell you never hit a man with a closed fist, but it is on occasion hilarious.

MAL: ...shouldn't you be off bringing religiosity to the fuzzy-wuzzys or some such?
BOOK: Oh, I've got heathens aplenty right here.

INARA: What did I say to you about barging into my shuttle?
MAL: That it was manly and impulsive?
INARA: Except that the exact word I used was "don't".

MAL: Kaylee, what the hell's goin' on in the engine room? Were there monkeys? Some terrifying space monkeys maybe got loose?

ZOE: Sir? I think you have a problem with your brain being missing.

KAYLEE: There's no call to be snappy, Jayne.
JAYNE: Are you about to jump onto a movin' train?

JAYNE: Time for some thrilling heroics.

JAYNE: These are stone killers, little man. They ain't cuddly like me.

MAL: Whatever happens, remember I love you.
ZOE: Sir?
MAL: Because you're my wife.
ZOE: Right. Sir. Honey.

WASH: Did he just go crazy and fall asleep?

MAL: Nice shot.
JAYNE: I was aiming for his head.

"Can I have one more glass of Ng-Ka-Pei, please?" (Mal, ordering in bar.)
Note: Ngkapei is an actual Chinese rice wine/liqueur soaked in the root bark of the medicinal herb acanthopanax. More about Ngkapei(approve sites)
"Oh, this is a happy development..." (Mal, about impending barroom brawl.)
"Horrible old tyrant..." (Kaylee, referring to Mal and getting back to work)
"an absolute genius" (Kaylee, referring to Mal and his plans.)
Understand? (Jayne, to Simon about his unimportance.)
dog-humped (Jayne, about location not being Niska's rendezvous spot.)

In the sick-bay, two clipboards(approve sites) are visible on the wall next to River. The word "Oakton" is legible on the bottom of one. Apparently some Earth-that-was companies still exist in the future. :)

Retrieved from http://www.fireflywiki.org/Firefly/TheTrainJob
Page last modified on June 09, 2010, at 08:54 AM MST