Wash and Zoe are having a bit of a tiff about Zoe's relationship with Mal, so instead of Zoe going down planet-side for a drop-off, Wash goes with Mal instead, but when they try to sell their stolen Alliance medical supplies, Mal and Wash are ambushed and kidnapped. Turns out their captor is Niska, the crime lord Mal pissed off something fierce back in The Train Job. 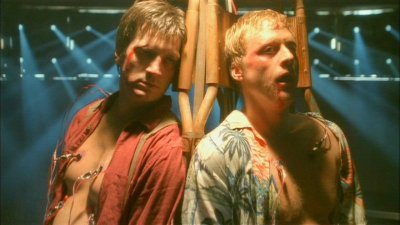 There's torture. Lots of it. As well as an extremely exciting rescue by the crew.

Zoe goes in to make a ransom deal. She's only got enough for one of her guys, and she immediately chooses Wash. Wash and Zoe head back to Serenity and arm themselves to the teeth, preparing to go back in with guns blazing to rescue Mal. The rest of the crew surprises her by volunteering to go along.

BOOK: Yes, I'd forgotten you're moonlighting as a criminal mastermind now. Got your next heist planned?
SIMON: No. But I'm thinking about growing a big black mustache. I'm a traditionalist.

WASH: And they grew into a big tree, and they all climbed up the tree into a magical land with unicorns and a harp.

ZOE: Is there any way I'm gonna get out of this with honor and dignity?
WASH: You're pretty much down to ritual suicide, lambie-toes.

WASH: I am a large, semi-muscular man. I can take it.

SIMON: You are my beautiful sister.
RIVER: I threw up on your bed.
SIMON: Yep. Definitely my sister.

WASH: I can't stand the thought of something happening that might cause you two to come back with another thrilling tale of bonding and adventure.

WASH: Hey, I've been in a firefight before! Well, I was in a fire. Actually, I was fired from a fry-cook opportunity.

WASH: I don't want you to spare me, Mal. If you think you know what's happening, then you tell me. You wouldn't spare Zoe if she were in this situation with you, would you? You would be planning, and plotting and... possibly scheming. So whatever Zoe would do in this instance is what I wanna do. Do you know why? No matter how ugly it gets, you two always come back with the stories. So... I'm Zoe. Now, what do I do?
MAL: Probably not talk quite so much.

WASH: Once in flight school, I was laconic.

WASH: I mean, I'm the one she swore to love, honor and obey.
MAL: Listen... She swore to obey?

WASH: You she obeys! She obeys you! There's obeying going on right under my nose!

JAYNE: Could be he's harboring some resentment at us for putting his man through our engine.

WASH: Bastard's not gonna get days.

SIMON: Well, it's a clean cut. With the right equipment, I should be able to reattach it. That's assuming there's a head.

ZOE: Preacher, don't the Bible have some pretty specific things to say about killing?
BOOK: Quite specific. It is, however, somewhat fuzzier on the subject of kneecaps.

NISKA: You died, Mr. Reynolds.
MAL: Seemed like the thing to do.

JAYNE: Smellin' a lot of "if" comin' off this plan.

MAL: You want to meet the real me now?

RIVER: No power in the 'verse can stop me.

MAL: Haven't you killed me enough for one day?

ZOE: This is something the Captain has to do for himself.
MAL: No! No, it's not!

"All the planets in space flushed into my butt" (Wash, to Zoe about not caring what Mal thinks.)
"little sister" {in script without English} (Simon, addressing River.)
"a knot of self indulgent lunacy" (Mal, about Wash & Zoe arguing and Wash going on the job.)
"cow dung" (Mal, referring to Wash's sabotage trick to go on the job.)
"Damn it!" (Mal, as sees laser-sight dot.)
"Mother humping son of a b----." (Mal, addressing Niska.)
"Filthy fornicators of livestock!" (Book, referring to Niska & henchmen, on seeing Mal's ear.)

Retrieved from http://www.fireflywiki.org/Firefly/WarStories
Page last modified on June 09, 2010, at 08:56 AM MST