A dead guy on the windshield interrupts a little game of calvinball. The crew boards a derelict ship from whence the dead guy came, looking for salvage first and survivors second, only to discover that the crew of the derelict was killed by Reavers. Just when they think a ship full of crazed cannibals intent on chewing their innards out is the worst thing that could happen, up pulls an Alliance Cruiser. 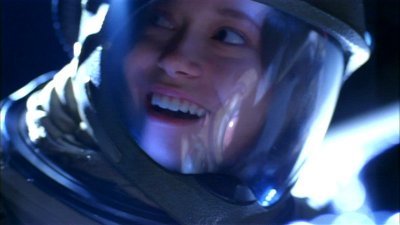 No problem, right? There's just that small matter of a couple of Alliance fugitives on-board, not to mention the cargo they just lifted off the derelict without a salvage license, and the sole survivor of the attack they've got sedated in the Med Bay...

{Proximity alarm goes off.}
WASH: Oh, god! What could it be? We're doomed! Who's flyin' this thing? Oh. Right. That'd be me. Back to work.

MAL: Wash, you have a stroke or something?

JAYNE: I think that fellow we ran into did everyone on board, killed them all, then decided to take a swim through space, see how fast his blood would boil out of his ears.
WASH: You're a very "up" person.

JAYNE: He looked bigger when I couldn't see him.

BOOK: So he'll live then.
MAL: Which to my mind is unfortunate.

MAL: Reavers ain't men. Or they forgot how to be. Now they're just nothing. They got out to the edge of the galaxy, to that place of nothing, and that's what they became.

MAL: It's a real burden being right so often.

MAL: Looks like civilization finally caught up with us.

MAL: If I didn't know better, I'd think we were dangerous.

ZOE: Captain was looking for a pilot. I found a husband. Seemed to work out.

HARKEN: You fought with Captain Reynolds in the war?
ZOE: Fought with a lot of people in the war.
HARKEN: And your husband?
ZOE: Fight with him sometimes, too.

WASH: The legs. Oh yeah, definitely have to say it was her legs. You can put that down. Her legs, and where her legs meet her back. Actually, that whole area. That, and above it.

WASH: Have you ever been with a warrior woman?

(These last four are from a scene that exhibits more than half of the characters beautifully - the three minutes of the Alliance ship captain? interviewing Serenity crew one after the other.)

"Mother of god." (Jayne, on seeing derelict ship.)
"Just our luck!" (Mal, on realizing it was a Reaver attack.)
"name of all that's sacred" (Wash, invoked on overhearing shots on derelict ship.) See also: Safe, The Message
"Crap." (Wash, on learning it was a Reaver attack.)
"Loopy in the head." (Jayne, about waiting around for Reaver victims' funeral.)
"Dear god in heaven." (Mal, on learning of Reaver survivor's mutilation.)
"Jerk." (Jayne, referring to Alliance's Harken.)

Retrieved from http://www.fireflywiki.org/Firefly/Bushwhacked
Page last modified on June 09, 2010, at 08:46 AM MST