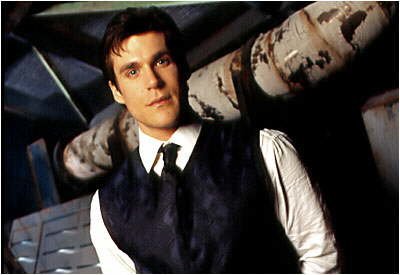 Everything I have is right here.

Once a talented trauma surgeon on Osiris, Simon Tam now finds himself on Serenity, serving as the ship's medic.

Both Simon and his sister River are fugitives from the Alliance, following Riverĺs escape from The Academy. While Serenity's crew resupplies and looks for work on Persephone, Simon boards as a passenger (with River in stasis, concealed in a container). When River is prematurely revived while the ship is underway, Simon strikes a bargain with Serenity's captain, Malcolm Reynolds: serve as medic and keep on the move, or get off at the nearest planet, hospitable or not.

Although bound by the Hippocratic Oath (First, do no harm...), there are no limits to what Simon will do to protect his sister. It was at great personal expense that he coordinated her escape from The Academy, going so far as to spend his fortune, abandon his career, and defy his parents (Safe) to ensure her survival.

Simon's refined upbringing doesn't offer much to help Simon ingratiate himself with the crew, but he's nearly indispensible as a medic on a ship whose crew gets into as many scrapes as Serenity's crew does. In spite of their differences, he's managed to fit in with this band of misfits, trying to help rescue Mal (Shindig, War Stories), coming to an understanding with Jayne (The Train Job, Trash), and winning — sometimes — Kaylee's affections (Jaynestown, The Message, Serenity Movie).

Retrieved from http://www.fireflywiki.org/Firefly/SimonTam
Page last modified on September 30, 2006, at 10:52 AM MST